Here is a proof of the Pythagorean Theorem. This is the well know formula:
a² + b² = c²
where a and b are two sides of a right triangle, and c is the hypotenuse.

Below is a figure showing the geometric proof of the theorem. Following the figure is an explanation of each step. 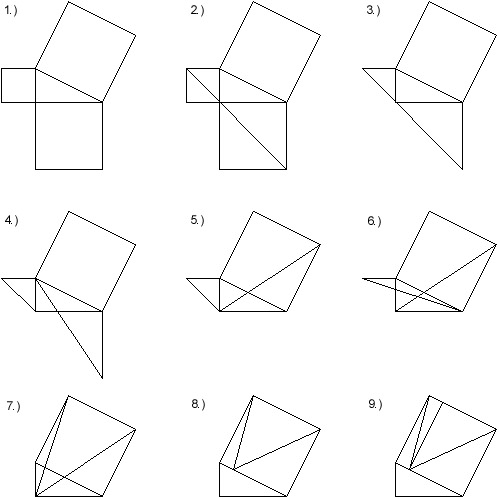 1.) Start by making squares on each side of a triangle, with the length of the side of a square being the length of a side of the triangle. The areas of the three squares, then, are a², b², and c².

2.) Divide the two squares not on the hypotenuse into triangles.

3.) Ignore two of the newly created triangles for right now. Just remember that their area is equal to the area of the triangles that will be used.

4.) Slide the vertex of the one triangle parallel to its base, so that the triangle shares a side with the square on the hypotenuse. Since the vertex was moved parallel to the base, the area has not been changed.

5.) The triangle can now be rotated 90º to be as shown. The sides are equal in length to the sides they share with the triangle and square.

6.) Slide the vertex of the small triangle in the same manner as was done in step 4 for the larger triangle.