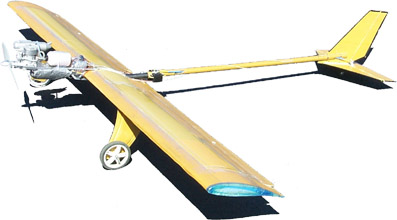 Every year, the Society of Automotive Engineers (SAE) sponsors a design competition for college students to build a remote control aircraft capable of carrying the maximum weight possible. Teams of students from around the country and Europe must conceive, design, build, and fly the aircraft. In addition to the aircraft itself, the teams must submit a report detailing the aircraft and predicting its performance. At the competition, the teams must give a presentation for their airplane. The teams are scored based on their report, presentation, and performance of the airplane, and are given bonus points for coming close to their predicted payload.

For the 2001 year, the University of Maryland took advantage of a new rule changing concerning the cargo bay. For all previous years, the rules specified all linear dimensions of the cargo area. These dimensions made the cargo bay fairly bulky, and essentially made it so that all the aircraft needed to have a large fuselage. In 2001, the rules were changed, specifying only that the cargo area have a certain minimum volume, and be rectangular in cross section. Maryland used this rule change to construct their airplane such that the cargo bay fit inside the wing, greatly reducing the size of the fuselage. This fuselage size reduction decreased drag, and allowed the wing to be bigger without the aircraft surpassing the maximum allowable planform area.

Although our aircraft did not win the competition, it was one of the more innovative designs, and did fairly well for being the first span-loading airplane in the regular class. Our team placed 13th out of 39 teams. I would not be surprised to see other teams emulate our design in following competitions.

Below are some pictures of our aircraft, from the design phase through testing. I do not have any pictures from the competition yet, but I plan to add them in the future.

Here is the test rig we used to test our landing gear. It was a wood and steel frame to which the landing gear was attached. It then used pulleys to run down a rope "track" to simulate the flight path during a landing. There was enough slack in the rope that there was a limited simulation of rollout as well.

Dr. Barlow, the director of the Glen L. Martin Wind Tunnel at the University of Maryland, was nice enough to let us use the wind tunnel for a couple hours to test our aircraft. This allowed us to get lift and drag information to use in predicting flight performance. It also allowed us to test various wing tips to see which was the most efficient. Our baseline was a simple flat end. This proved to be the worst design, as it allowed the formation of the strongest wingtip vortices. The other two wingtips we tested were a Hoerner wingtip, and an end plate. The Hoerner wingtip is curved in such a way as to discourage the formation of wingtip vortices, by making it harder for the air to flow around the wingtip. The end plate accomplishes the same function, but it is much more obvious how it accomplishes this. The wind tunnel testing indicated that the Hoerner wingtip and end plate both provided substantial performance improvements over the baseline wingtip. The Hoerner wingtip performed slightly better than the end plate, giving a better lift to drag ratio. It also weighed less than the end plate.

The flight testing was very important in understanding the dynamics of the airplane. It helped us to adjust the balance of the plane, to make it more stable in flight. Unfortunately, we did not get as much flight testing done before the competition as we wanted to, but it was still very important.

Number of people who have visited this site since 15 February, 2002: